Thanks to all of you who responded to my plea on ideas of what Jake, a pit mix rescue dog, wants when he sits in front of me and makes loud demands.  As you know, I tried food, treats, a walk, a retrieve-the-ball game and hugs.  None of this changed the cadence of his demands. 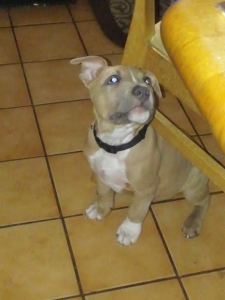 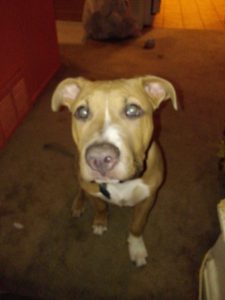 I liked this one – Cathy suggested he wanted me to go get his siblings and rescue them, too.  No can do, but it’s a nice idea.

Nikki suggested he was asking for Samantha who goes home at night with her mom.  He adores Sammi so maybe.

Lisa suggested he wanted to go to the doggie park and is demanding I pull the car out of the garage – at ten p.m? Now I should have taught Jake to tell time.

Speed says he is just trying to gain my full attention which is on a movie and not on him.  Now that could be – he is a demanding dog definitely.

Loraine says he is just a very verbal dog and won’t shut up!  Well, this is what I was trying to solve.  I believe dogs make requests, and I usually try to communicate with them to increase the bonding, but last night he was yowling again.

The vet says he is healthy so no concerns there.  Then we had another problem to add to Jake’s yowling.  Sally now barks sharply at him, wagging her tail, but saying “Shut up, brother!”  Pete stared at them both in disgust as he was watching an HBO movie. He went back to his computer.  Well, it was a lousy movie anyway, but who could hear it over these two?

I think I overdid trying to understand my dog here.  Because he came in as a tiny pup with initially an inability to connect, I forgot he is a healthy, active, loving and sweet dog nowadays.

For those of you who downloaded the Kindle version of AstroPups, and have questions, I will be happy to answer them either in comment in a post or by email (About Us, upper right).