Can you guess the breed of this famous dog?

No, it’s not the well known Collie, Lassie, but this dog has starred in movies. Remember the movie Oliver? Bill Sykes owned one of this breed. Rarely camera shy, this dog has also been a TV star.

General George S Patton took a dog from this breed with him when he travelled. He named his dog Willie – after William the Conqueror.

Target has this dog as its mascot.

He is also Spuds McKenzie – the Budweiser dog.

This dog has won Best in Show not only in the U.S, but also in England, South Africa and Australia. It knows just what to do to win the trophy. The dog has a jaunty, confident step in the ring, and always smiles at the judges!

This dog is not just famous, it has skills a lot of breeds do not have. The Bull Terrier is a good watch dog, but so are other breeds. What is special about this dog is that it has an uncanny ability to sense when somebody is up to no good. It has amazing instincts and intuitive powers.

If the owner has raised the pup in the right way, and has a lifestyle that fits with its temperament and exercise needs, it’s a super dog.

Bull Terriers are solid and stocky. Most of them are white often with brindle coloring, and about 21” tall. Their energy is explosive. As a pup, they do not seem to know any boundaries and you would have to be vigilant about stopping your pup from straining muscles and pulling tendons. I kid you not. Hyper speed is this pup’s style. 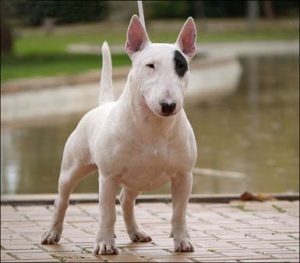 Training a Bull Terrier is not a challenge if you are firm, consistent, and give treats. However, the pup can be over-eager to enter into the game of training, so it must learn right away that you are Alpha –the leader of its pack.   If you lose your temper and are aggressive with this pup, though, the dog will become stubborn and aggressive, losing the breed traits that make it an outstanding companion.

As an adult dog, lots of long walks will be important. A Bull Terrier loves to go on walks, but it may not play nicely with other dogs if you have not socialized the pup. Three – four months is a good time to do this. Introduce the pup to other dogs and people and be friendly to all so the pup will gain confidence through your behavior.

The dog will enjoy your friends who are visiting once it knows they mean you no harm.

Some pups have been born deaf, so make sure you check out the pup you choose carefully. There is another possible problem with a Bull Terrier in that they are often allergic to mosquito bites and can break out in a rash when bitten. If you live where there are mosquitos, use preventative measures to safeguard the pup/dog.

These chewable tablets are a good  protection against mosquitos.  Your dog will also be protected from fleas and ticks.  This tough dog has sensitive skin and could be allergic to sprays applied for preventive measures against parasites.

Bull Terriers are clean dogs and grooming is minimal. To increase the bonding, though, brushing the dog and saying nice things really helps. Bull Terriers wriggle with joy when their beloved owner gives them attention. They are loyal, steadfast dogs if they have an owner who is calm, firm, positive and loves them totally.

If you are wondering which Zodiac signs were favored with Bull Terriers, we suggested them for Capricorn and for Scorpio in AstroPups, available in paperback or Kindle at Amazon Books.

Thanks for coming back to read my blog. I’d love to hear from you. You can leave a Comment or email me. My email is on About Us, top right of page. Click on About Us and scroll down.  The banner of dogs remains for the post, About Us and Reviews.