I received an email from a friend today. Her name is Jennifer. In her email she said that she knew lots of people looked up their horoscopes in the newspaper, but how seriously do they take astrology?

I never thought about it when writing the book. Studying the breeds of dogs, I thought about the kind of owners they would need. I hit upon the idea of sun signs as it was a familiar and popular guide.

Jacqueline Chapple, the astrology consultant on the book, patiently explained to me that sun signs were not the whole person astrologically. Other influences were strong also, but she did say it was a guide I could use and we were off to the races.

When doing research for the book, I went to dog shows and talked to the proud owners doing the touch ups on their beautiful dogs, visited breeders to get expert insights on their dogs, and stopped people on the street to chat about their dogs. At the doggie park, while my dogs romped and played, I chatted to more people about their dogs. Research books are great and the internet helpful, but its people and their dogs which gave me the best insights. I had trained several dogs, but was now dealing with 85 breeds. Thatsalotta dogs!

A breeder of Rottweiler pups laughed out loud when I told him I was matching sun signs with breeds. “You’ve got to be joking,” he said, ”It takes a special owner to get one my pups. I screen carefully.” Right, he was one of the good ones. As I was leaving, he ran after me. “Um, what signs got my Rotts?” he asked.

I grinned. Who could resist knowing that?  “Come on,” he said. “What sign?”

“We suggested Rotts for Aries,” I said.

He ran to the house yelling his wife’s name and demanding to know what sun sign he was. I didn’t hear her answer.

Dog people were intrigued, but unsure of the concept. Astrology people told me as Mrs. Chapple had that people were more than their sun signs. They all wanted to know what dogs were suggested for their sun signs, and wanted to read about themselves as dog owners via astrology and what kind of breeds they may get along with.

I looked up some astrology blogs on Google tonight. They were very complicated and some quite beautiful. Of course they were all about the influences in the universe.

I’m sure that a lot of dog people are astrologers.  Maybe they pick their dogs for when they were born. I am a breed person and define dogs by their breed traits.  A woman told me she should pick a Virgo dog as her Ascendant was in Virgo. Another said she was very intense and emotional as her Venus was in Scorpio so she should choose a Scorpio dog. That’s great because they will read the breed traits of all the dogs suggested and know if the dog is right for them and their lifestyles. If people know other influences which affect their personalities, look how many dogs they will have to choose from and learn all about. 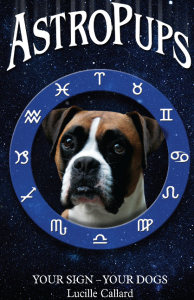 To find out more about AstroPups, check it out on Amazon.com. Books or by author, Lucille Callard.

I hope I have explained my book and the reason I wrote it for all interested people.  Thanks to Jennifer for asking the question which prompted writing this post.

I appreciate your return to my blog.  Please leave a comment or you can email me.  My email is on About Us, top right of page.  Click on About Us and scroll down.  The banner of dogs remains for the post, About Us and Reviews.