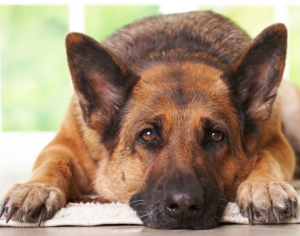 I was asked to tell more about Kelly and her lunatic dog so here it is.

Kelly had told me she was getting a rescue dog, a German Shepherd called Max. She lives in an apartment, without a fenced yard, but planned on jogging with Max. Kelly was enthusiastic about getting both a companion for her runs and a protector when the sun went down. I like German Shepherds, but warned her that it was important to get some history on her new best friend. When Kelly called me back and told me she was the second rescue home Max had lived in, of course bells went off. I told her she would have to work with Max, gain his trust, and establish a bond so it would work out for both of them.

Kelly had adopted Max when she had vacation time, but she was called back into work for an emergency and was suddenly gone a lot. Neighbors complained that Max howled all day, sounding like a wounded animal. Upset by this, and not sure what to do about it, Kelly removed him from the large crate he was housed in when she went to work, and left him in the home, planning to return early to walk and feed him. Right, you guessed it, another emergency came up, and she came home late.

Poor Max. Abandoned again – his third home now, he took his frustrations out on the furniture. After Kelly had said several times “No good deed goes unpunished!” she was surprised that my sympathies lay with the dog. People kept letting him down.

Nowadays, things are good with Kelly and Max. They jog together all the time and their bond is so strong, Kelly denies ever saying she wished she had never got the dog. When Kelly has to be at work for long hours, Max goes to doggie daycare. If left at home when Kelly goes shopping, he no longer chews up the furniture.

Your lifestyle is important

Here’s where lifestyle plays a significant role when choosing a dog. You can work around it, as Kelly did, but it is an important factor if you are choosing a new breed of pup. Some breeds can stay at home quite happily all day if they can access the yard, or if you arrange for someone to drop by and take them outside.

I think of dogs as being part of the family, even if it’s only a family of two, you and the dog. There are so many breeds to choose from, but you may have a particular breed in your mind’s eye and say, “I have always wanted a Border collie, a Rottweiler, or a Poodle.”

These are just examples of dogs you may like. I could fill the page with breed names. Still, you get the idea and know what I am saying. Okay, you could be perfect owners for these breeds, or not. Will your personality and your lifestyle fit with the favored breed? It may or it may not. Is where you live important? Absolutely!

Lots of people get dogs they fancy, but when it doesn’t work out, they can walk away. Maybe they walk with a tear in their eyes, or are angry it didn’t work out, but they give up the dogs. Dogs have no idea why they are suddenly without a home, a loved master, or a place to be. Their world falls apart. Guess that’s why I am always on the dog’s side.

There are dogs which seem impossible – much like people. There is something wrong with the way they are wired, or they had a horrible puppy life and couldn’t get passed it. Even if you were the best owner for one of these dogs, they could break your heart. For the most part, though, breed traits do run true. I know people who have dogs so not like they are supposed to be, they are like a puzzle with pieces missing. Still, if you love your odd dog, you will probably keep it and scoff at all the articles on the breed. After all, you own him/her and know better.

Losing your beloved dog, your friend and companion through thick and thin, can be devastating. When people call me and tell me their dog has gone, they cry a river, as we do when we lose one of ours. Unfortunately there are breeds who bless us briefly, as the breed has a short life-span. Other dogs live a long time. For some, getting a new pup, or helping a Rescue by adopting a dog who desperately needs a forever home, is not possible. Their grief overwhelms them and they cannot even think of getting a “replacement”. Initially, I do not recommend getting a new dog to fill the vacated place in their hearts. People need to grieve for their dogs as they would for any family member. As time passes, I send them a link to a Rescue site, especially if I see that there is a dog, much like the one they lost, available and needy.

Cheryl is absolutely sure her Basset Hound, Boots, has come back to her. She was devastated when Boots died over a year ago and was not interested in replacing him with another dog who could break her heart again. That was before she found Boots II. The moment she saw the pup, she said that she knew her very own Boots had returned to her. “He falls over himself, just like Boots did,” she said happily. “And he will do anything for a snack, just like Boots would.” I didn’t point out that breed traits usually run true. Besides, she could be right. As she enthused over all the identical things Boots II did, she almost convinced me.

It’s a lovely concept don’t you think?  If we believed it, we would roam the country trying to find the reincarnations of our beloved Trixie, who died last year and Wrigley, who died five minutes after her best friend. They were so very close and if you saw one, you would see the other right behind. We grieved over both and were so grateful to have Sammi to cheer our days.  Well, I did say Cheryl almost convinced me, but I will leave such matters to the mystics among us!

You can contact me through comment or by email.  My email is on About Us – top right.

Thanks for visiting my blog.  I will post more tips and tails soon 🙂