You are a Virgo if your birthday falls between August 24th through September 23rd.  As dog owners go, you are one of the best!  True you tend to be critical, and will expect obedience eventually from your pup, but you will give second chances. Your pup will have lots of chances to please you and you and your pup will create a bond that would be hard to sever.

One dog in particular would be so right for many of you.  It is a very special dog and much beloved all over the world.

Originally, Labs were bred on the island of Newfoundland, which is a province of Newfoundland and Labrador, Canada.  The British are credited with developing the breed.

This dog’s talents are extensive.  Hunting, tracking, police work, search and rescue, guide dogs, aids for the disabled to name some of them.  It is not surprising to learn that the dog is famous for its abilities and skills.

Jake was one of the heroes in the rescue of victims of 9/11.  He was also called on to serve Hurricane Katrina victims.

Lucky and Flo were amazing at detecting counterfeit.  They sniffed out 2 million pirated counterfeit DVDs.

Famous people who adored their Labrador retrievers were former president Bill Clinton.  His dogs were named Buddy and Seamus, Russia’s Vladimir Putin’s dog was Koni. Endal was the British Lab who was the most photographed dog  Among other things, Endal was the first dog to ride the London Eye and the first to operate an ATM

Rascal was the first chocolate lab to win the National Field Trial Championships, but the chocolate lab I knew was a champion stealer 0f all things edible.  Very few things were beyond his reach.  Tikka belonged to my daughter Nikki and her family. I had to replace the Advent calendars sent to the grandkids more than once and stopped putting goodies in packages.  On a visit, I saw Tikka help herself to a frying pan of bacon.  This was my fault as I didn’t know the stove was fair territory to Tikka.  It was impossible not to adore this dog, though.  Yes she was naughty, but so loving and giving of herself, she won us all over. 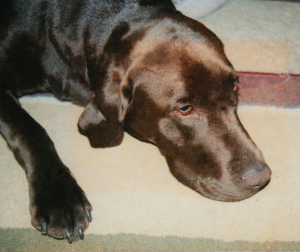 Hopefully I have not left out your favorite famous Lab.  If so, let me know and I  will add him or her to the post. (See Comment top left)

All Labradors without exception need to retrieve something to give you when you get home.  The dogs are so pleased to see you they need to give you a gift.  This could be a shoe, a hat, a glove.  Never scold them for grabbing something of yours..  The habit is ingrained and as natural as breathing to a Lab. Labs were trained to retrieve game.  They did this to please their owners.

Children and labs get long well.  This dog is a hunting dog, a family dog, a friend and companion, and will return your affection ten fold.  For most of you Virgos, it would be hard to resist a Labrador Retriever, but I will tell you about another dog suggested for your zodiac sign on the next post.

Of course, if you want to read about yourself as a person and dog owner, check out your chapter in AstroPups. (available on Amazon Books). So much depends on what the universe is doing, doesn’t it?  It has helped to make you a wonderful dog owner and an all round nice person

Thanks for visiting – please leave a comment – see you soon 🙂