As many of you know by now, I want to help people to choose the right dog.  Many dogs come into the family because someone likes the look of a pup for sale, hopefully from a breeder and not a puppy mill.  A friend has a female who had a litter and they offered a pup to you. You decide to adopt a rescue from a shelter.  There are many ways a pup can come into your life, and once it is a part of your family, many of you will accept its breed traits or sigh and try to find another home for the pup who grows up to be a dog that simply does not fit with you, your family or your lifestyle.

Rescue dogs abound and all sorts of breeds and mixed breeds are available.  You can go into this wonderful transaction with your eyes open and choose the right dog, still a rescue.  While it is a fact that you may have to overcome some tough times your rescue dog might have experienced, the breed traits usually hold true. Dogs give second or even third chances to people who prove they really care, and if its a breed capable of devotion and affection, you will have your forever dog.  All you have to do is show you can be trusted, unlike somebody else who owned the dog previously and it became a rescue.  Of course, some dogs are given up for genuine reasons, like the owner is deployed overseas, or passed away, or the owners lost their home.  Unfortunately genuine reasons are not as common as abandonment.

Most dogs, if they have the right environment, are true to themselves.  If they are country dogs, ranch hands, agile, energetic dogs they should not have to fit in with concrete and high rise buildings.  If you work fulltime and then some, how does your dog get the exercise it needs to flourish?  These dogs are intelligent, trainable, loving, even devoted, but left to their own devices and unable to exercise fully, they can become destructive and very unlike their breed traits.

Let’s take an example.  Austalian shepherds are about l7th in popularity in the U.S.  They are not from Australia, of course, and there are guesses as to why they got this name – maybe they were sheep herders for sheep from Australia.   This magnificent dog needs to run, run and then run.  They need to be busy, mentally and physically.  They have been bred for working on ranches and farms.  No dog is prouder than this one when it does its job well.  The dog is tireless on hikes, and is famous for its agility.

That being said, I know an Australian shepherd who was not able to work, run, exercise, and was left alone all day in the suburbs while its owner, a fireman, had to work. 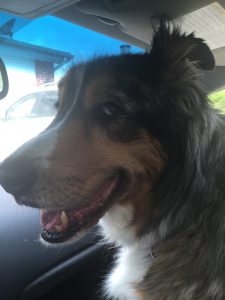 The dog’s name is Auggie.  I know the dog well, and am fond of him, but he changed from a lively pup to a difficult dog.  He became super possessive of his food, was aggressive to strangers, and did not play nicely with other dogs. In fact, if he had the chance, he would attack dogs who dared to come near his property.  He was not meant to be the dog he became, but his owner’s lifestyle did not permit him to develop as he was meant to develop.  Auggie was loved, fed, watered, and bored.  Firemen work three day shifts, and come home exhausted, dealing with life and death situations.  A three mile run was not likely, although some days his owner rode his bike with Auggie in tow to try to give him exercise.

Unfortunately, Auggie was not in control of himself or under any control when he bit Anna’s face recently, and she had to be rushed to the emergency room.  Anna, adored the dog, and tried to feed him his food. Nobody touches Auggie’s food, not even one of his own.

The pup was a rescue – one of those family things where a member couldn’t keep him and needed a home for him.  Now, of course, the dog is rarely allowed to be in the house.  He is safe though with others he loves.

The point is that Auggie was not a good fit.  Left too much on his own, to his own devices, he developed his own codes of behavior and none of them were good.

If you have children, getting the right dog for your family is super important.  Small children will adore the dog, and if they are bitten, it is a shattering event and a guilt trip for you. From that day on, your child will probably fear dogs, and you have the problem of a dog who cannot be trusted around your child. You love the dog.  No question, your child comes first.

I took Sally and Jake over to visit Anna. I wanted to see how she felt about dogs after experiencing Auggie’s bite. Anna giggled at Sally, our toy breed, and yes, tried to feed her.  She hadn’t learned her lesson on that one, but Sally licked her hand which gave her a fit of giggles. “I like that doggie,” she said happily.

Anna took one look at Jake, our pit mix, and leaped into her father’s arms.  “He’s too big,” she announced solemnly, staring down at Jake with apprehension.  Jake didn’t take it personally.  He reached up and licked her leg before running after Sally. She giggled, but preferred to stay in Dad’s arms.

An Australian shepherd must have lots of exercise, preferably live in the country, and live with people who understand the breed.  This dog is smart, needs to be useful, and should have the chance to run freely in the fields. The dog will do what you ask of him or her, but if you ask little, and the dog is left alone too much, over long periods of time, it will not have a chance to develop into the dog it was meant to be.

I will be chatting to you further about breed traits, lifestyles and personalities and really want to help you to get a good fit.  I will usually be on the dog’s side, as you chose the breed and the dog will be yours forever, or not.

If you want to contact me, please leave a comment or email me.  My email is on About Us, top right of page. Click on About Us and scroll down.  The banner of dogs remains for the post, About Us and Reviews.

Thanks for visiting.  See you soon. 🙂

4 thoughts on “Your Lifestyle-Your dogs”